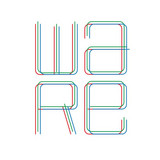 So, it all began in 2018. “Wait, no. Then we wrote our first WARE song but it began much earlier”. Andre and Bas met somewhere over a decade ago and were making music under the name Tomorrow Starts. Dark and intense songs which were a reflection of their sometimes moody feelings. In 2017 Bas met Eric, who in that period decided to make music an even more integral part of his life, and took up guitar at Tomorrow Starts. They played a few gigs and jammed a lot. “The jam sessions began to create a very cool vibe by adding electronic instruments.” At the end of summer of 2018 they left their studio in Leiderdorp, which was to be demolished, and moved into the Ballonpad Studio. “The new environment had a very creative impact on us”. Songs started to emerge and the WARE sound was born. “A crispy and melodic crossover of many of our musical influences was taking over. You could say it’s a funny blend of 80’s pop, Italo Disco, Brit Rock, New Wave and Electro.” The songs are about freedom, expression and change. Life is beautiful, special and superficial. WARE is here!