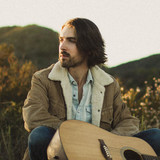 Ben Greenberg is beginning to find his place in the world. He moved to LA in 2016 without a real plan, hoping to become a better musician by being a small fish in a big pond. With a background in singing, guitar, making coffee, and little else, he found enough work to stay afloat. His next two years would be marked by self-doubt, struggling with adulthood, and scraping by financially. Despite his difficulties, Ben was making progress. He performed, organizing tours of small venues and house shows up the West Coast. A more defined songwriting voice began to emerge. He recorded an EP, which landed him a music festival performance. The EP also caught the ear of producer Jordan Ruiz. Ben sensed a kindred spirit in Jordan, and asked him to collaborate. After months of writing and recording, he had completed his debut album, Son of the Hills. "Son of the Hills" is roughly the meaning of Ben’s name - Ben means “son” in Hebrew, and Greenberg means "green hill". It’s a fitting title for an album focused on self-definition. The tracks take inspiration from early James Taylor, Nick Drake, Bon Iver, and Aoife O’donovan. The lyrics deal with Ben’s struggle to grow into his skin, to believe in himself, to come to terms with his past, and to find meaning in life as he looks towards the future. The world we find ourselves in is full of challenges, and the way forward is not always clear. Still, Ben sees the light shining from just up ahead, and he humbly hopes to help others see it too.