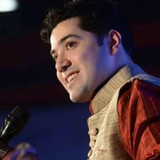 Samrat Pandit is an exponent of Bade Ghulam Ali Khan’s Patiala Gharana. Son of the music genius Jagdish Prasad Pandit, he sings Khayal and thumris, and was raised in the pure tradition of Indian classical music. Traditional music lineage He is the 6th generation of his family into music. A lineage of court musicians, his grandfather and father were protected by the former principality of Raigarh. His father and guru, late Pt Jagdish Prasad is considered as a genius of music. After the end of Maharaja’s era, he became a direct disciple of Ustad Bade Ghulam Ali Khan, the doyen of Patiala Gharana. Talented from childhood Samrat’s talent surfaced early in his childhood when he recognized complex ragas and made notations of any music played to him. At age 5, he participated in a youth talent program of the National Indian Radio. He started, at age 10, to accompany his father in concerts in India and on television. Solo career Samrat began his solo career in 2001. Being a certified All India Radio Artist, he records regularly at the national radio. He accompanied his father on stage until 2011 and received in 2014 the Sangeeta Shiromani Award by the governor of Maharastra. He performed in India in major musical conferences and started touring abroad India in 2013 including London, Toronto, Istanbul, Vilnius and Amsterdam. He also recorded CDs and DVDs supported by renowned artists Smt Girija Devi, Ustad Rashid Khan (vocal maestros, Pt Shubankar Banerjee (tabla maestro).