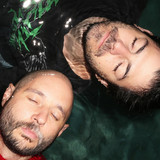 It’s been a nonstop run for Bag Raiders since the release of their ARIA-nominated self-titled debut, that gave birth to their global hit and multi-platinum record ‘Shooting Stars'. In the past few years the pair have turned out a set of EPs that have pushed their sound into new territory, from the tropical sonics of ‘Nairobi' through to the silky vocals of ‘Beat Me To The Punch', ‘Checkmate' and the vibrancy of ‘Friend Inside' and ‘Waterfalls'. A busy tour schedule has taken them around the world, seeing Glass and Stracey play a 30-date string of shows across North America, multiple sold-out tours of their homeland, plus support slots with icons Duran Duran and Chic. Bag Raiders have slayed crowds at festivals including Splendour in the Grass, Beyond The Valley and NYE in the Park, whilst keeping one foot in the club world, with regular DJ shows around Australia and remixes for the likes of Riton, Totally Enormous Extinct Dinosaurs, Crooked Colours and BANKS. Since dropping their second album ‘Horizons' in late 2019, the pair have been supported by tastemakers BBC Radio 1,

triple j, Sirius XM, Billboard, Mixmag and Indie Shuffle singing the praises of the band's eclectic-electronic works. The story of Bag Raiders is already the stuff of legend but in 2020, the Sydney duo prove that their best has only just begun.