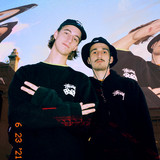 Abc Dialect is the blossoming project of producer duo Tomás Susevich & Luca Oliva Knight; two nomadic multi-instrumentalists hopping musical and geographical boundaries since their genesis in 2017. Rarely stationary but always suave, the fleet-footed pair oscillate between their hometown of Buenos Aires, London (where the project was originally formed) and their custom-built studio in Barcelona. This meandering voyage has allowed the duo to draw upon a vast array of influences; 90s house, 70s funk, soul jazz and R&B all coalesce in rich tapestries of nostalgia-tinged futurism. Their sleek soundscapes conjure a tech-noir metropolis where downtown pavements bask in a vibrant neon glow. Abc Dialect bridge the gaps between poolside disco, hypnagogic pop and industrial, synth-heavy nocturnes; in this twilight zone of opposing influences, the demure protagonists cruise downtown to the subterranean sake bars, seeking both to reminisce and to forget. The title Abc Dialect, which the two friends coined whilst exploring the streets of Tokyo, describes a desire to create universal, popular music which transcends linguistic barriers; a recognition of the unifying power of music and the limitations of the spoken word. Written by Eliot Otelli