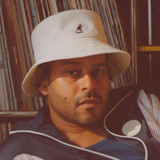 Twin Shadow, the fifth album under George Lewis’s musical moniker of Twin Shadow, brims with joy. These ten songs are imbued with the same energy and curiosity that compels someone to first pick up an instrument and noodle around, not because they harbor aspirations to write a hit but rather for the thrill of hearing—and feeling—what’s capable of happening when a string is plucked or a hand brushes over a snare. (It’s no wonder that Lewis employs the first instrument he first played, the saxophone, to electrifying effect on this album.) Recorded both at FAMA Studios in the Dominican Republic and Los Angeles’s Shady Acres, Twin Shadow’s songs are distillations of beautiful memories and stories both real and imagined. Lonely satellites, young people running away together to New Orleans, and a fleeting relationship that blossoms over a lost set of keys all converge on this adventurous album, which draws from the spirit and vitality of albums created during the golden era of soul and punk, including those by The Clash and Sly and the Family Stone. A stunning entry in Lewis’s catalogue and his first effort in three years, Twin Shadow is the sound of a musician reconnecting with what it means to love music in the first place.