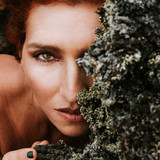 Accompanied by pianist extraordinaire Misha Piatigorsky and band, Morrison and her female guests mesmerized the audience with their powerful vocal instruments. Shining the light on female voices from the Latin Music genre, La Baronesa proved that night that she is indeed, one superior songstress with much to offer. - Ed Blanco, All About Jazz - WDNA The performances by Miss Morrison aided by her duet partners are poignant; a touchstone to Miss Morrison’s burgeoning legacy as a vocalist; quite apart from her contribution to stage and film. -

Raul da Gama - Latin Jazz Network Independent Music Awards nominee, Cristina Morrison is chameleonic, versatile, worldly, adventurous, and a tour de force. Affectionately known as the Baroness of Jazz, Cristina is a singer-songwriter-actress & producer. She was born in Miami and has lived in Quito, the Galapagos Islands, Rome, Los Angeles -where she graduated from the American Academy of Dramatic Arts- and currently is based in New York. Cristina sings & writes her lyrics in different languages and navigates through cross genre musical styles anchoring herself on a strong jazz foundation. Her latest album, "Impredecible: voces de mujer", features special guests Lena Burke, Mirella Cesa, Magos Herrera, Barbara Mendes & Consuelo Vargas. Cristina is an Ambassador for Plan International and a promoter of Arteducarte - Chapter Galapagos - an education program through the arts in public schools.