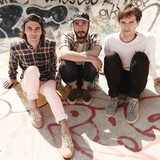 The Australian duo Jagwar Ma meld together bubbling dance music with hazy neo-psychedelia that may sound familiar to anyone up on their '90s alt-rock, particularly the Screamadelica-era Primal Scream or the Stone Roses. Multi-instrumentalist and producer Jono Ma and vocalist Gabriel Winterfield joined forces in Sydney in 2011. Before meeting up, Winterfield had been a member of the band Ghostwood, and Ma had spent time in the Lost Valentinos. The duo spent time developing their sound, and early reviews were good; both the media and fellow bands took a liking to them right away. Jono Ma also branched out into production, working with Foals and composing music for TV. The duo's debut album, Howlin', was recorded in a small studio in France that Ma had helped a friend build. The tracks were then mixed by producer Ewan Pearson and appeared on Marathon Music in early 2013. The album was issued in the US later that year by Mom + Pop Music. By this time, they had added bassist Jack Freeman to their live lineup and the trio spent a great deal of time touring during the next few years. They opened for the xx and Tame Impala, played around the world, and hit the summer festivals, a venue perfect for their expansive sound. Once off the road and after some deep songwriting sessions in Australia, their second album was recorded in the same French studio as Howlin'. Once the basic tracks were done, they headed to London to record drums with Warpaint's Stella Mozgawa and producer James Ford before mixing it all with Ewan Pearson. The resulting Every Now & Then was released in late 2016 by Mom & Pop and Marathon. ~ Tim Sendra, Rovi