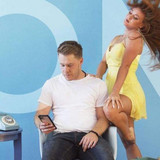 Championing a fresh, modern style with an eclectic fury of wide musical influences; BROMIE is an emerging dance & pop artist currently on his way up in the global music scene. Pop-perfect melodies, euphoria-dripped electronic soundscapes and emotional songwriting weave stories through his songs. BROMIE looks to break the flimsy boundaries of contemporary pop, crafting an entirely new sound that is distinctly his. Growing up he was hugely influenced by the guitar-fueled sounds of emo and pop-punk music. Soon delving into the worlds of EDM and pop. This diverse range of inspirations shines through in his meticulously modern sound that fuses lush guitar lines with show-stopping electronic drops and rich, emotive vocals. The story of BROMIE’s rise into music is anything but average. Born and raised in Minsk, Belarus he moved out to San Francisco in the early 2000’s, soon developing a love for emo and pop-punk music. This drove him to pick up the guitar and piano as he became immersed in the local scene playing in various bands. He lost his mother in a car accident in the late 2000’s. It was around this time he began becoming more involved in the creation side of music. Picking up music production after being inspired by EDM and crafting his own songs from scratch.