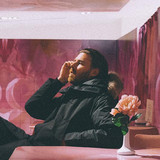 Representing a wave of Australian artists moving to the US, electronic artist and multi-instrumentalist LANKS is a unique and emerging talent, combining his jazz training and experimental approach to pop songwriting to create an emotionally rich and diverse body of work. After university he played in indie bands before more solo experimentation led to a string of EPs and his first LP, twentyseven, released in early 2018, which has had over 18 million streams and saw him tour with artists such as RÜFÜS DU SOL, Vera Blue, Broods, Glass Animals and RY X. At the end of 2018 LANKS released a short 3-track EP, Inoue, dedicated to his close friend fighting cancer, and featuring the singles Stronger Than and Spiritual Man. Shortly after he announced an indefinite hiatus from the project and a new direction with collaborative project, Ok Moon, alongside Dustin Tebbutt, Hayden Calnin and Xavier Dunn. They released their self-titled album in August, 2019. Whilst on hiatus, LANKS' Inoue EP grew on it’s own, amassing over 10 million streams in a period of zero activity, encouraging and inspiring new energy and an expanded body of work and return to the LANKS project. 2020 saw a move to Brooklyn, as well as a new solo folk EP, ASMR Love Letters under the name lindsay, and a new LANKS double album, SPIRITS PT.1 + 2, featuring many collaborators such as RY X, HWLS, Alice Ivy, Nalepa. SPIRITS PT. 1 + 2 will be released in late 2020/early 2021.