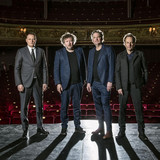 The Weeping Willows released their debut album in 1997 and were quickly associated with the growing interest in country in Sweden. But unlike the bands that would lead the actual country revival a few years later -- for example Alimony -- they never really played country, but a strange brew of different sentimental American styles. The result could be described as sentimental rock with thick string and horn arrangements. Their debut album sold very well, and through a lot of airplay, they quickly reached nationwide fame. In 1993, singer Magnus Carlson and percussionist Thomas Sundgren played country and rockabilly covers and were invited by members of Stefan Sundström's band Apache to play with them. In 1994, the project was named Weeping Willows but was nothing more than a side project, now playing covers of Elvis Presley, Roy Orbison, and similar artists. The coming years were spent doing club gigs in Stockholm and recruiting a seventh member, guitarist Nico Röhlcke. The other members of the band were drummer Anders Hernestam, bassist Stefan Axelsen, guitarist Ola Nyström, and pianist Mats Hedén. In 1997, they finally released an album with original songs, Broken Promise Land, which quickly reached a big audience, also selling well in Norway and Germany. The timing was perfect since in the mid-'90s country had started to be an acceptable genre in Sweden, after being scorned at for almost two decades. The Weeping Willows, with their extremely sentimental music, fit perfectly into this, even if the rock ballads they played only had streaks of country, leaning more on entertainment music. That Elvis is the number one influence is easy to hear when you listen to Magnus Carlson's singing. But the music style isn't as easily defined and takes as much from '50s rock as from the late '60s and early '70s, including everything that is supposed to make you cry. Until releasing the next album in 1999, the band managed to keep their popularity by touring festivals, making appearances on various TV shows (the revival of a practice so old-fashioned matched the band's music and appearance in a funny way), and participating in the film Under Solen. When Endless Night was released in 1999, the expectations were very high and the album quickly rose to the top of the charts. But the overwhelming critical acclaim the first album had received was not granted the follower. And in spite of selling well, Endless Night did not leave anything near the impression Broken Promise Land had done, and soon disappeared from the charts and stopped being played on radio. In 2001, Magnus Carlson made his solo debut with Allt Är Bara Du Du Du. ~ Lars Lovén, Rovi