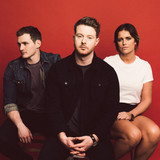 “Frisky electro pop with a bittersweet after-taste” - CLASH Hailing from the unassuming town of Cheltenham, Indie-pop trio CAEZAR are excited to release their much-anticipated debut EP ‘HAIL!’ . ‘Somewhere New’ has already been aired as a BBC Introducing exclusive, while CAEZAR’s previous single, ‘Waiting’, was featured on popular UK show ITV This Morning and their most recent offering, “Hold On” was premiered by CLASH Magazine. Playing alongside giant names such as Hozier, James Bay and Jack Garrett, CAEZAR can really hold their own in the scene and have had the pleasure of playing at the award-winning independent Barn on the Farm Festival as well as being featured on the acclaimed radio platform BBC Music Introducing. The ‘HAIL!’ EP boasts mastering by mastering engineer Stuart Hawkes (Amy Winehouse, Clean Bandit, Rudimental) and produced by Justin Broad (Jessie J, Emeli Sandé, Izzy Bizu, Corinne Bailey Rae). The two founding members of CAEZAR, Chris and Rich decided to take their passion for music to the next level when they both suffered sports injuries that meant they would no longer be able to play rugby for their local club. When Zoe joined the band in 2017, the trio really found their niche. Her soft synths and sweet-as-honey backing vocals helped build on the unique crossover of pop, indie and rock elements that make up the band’s special sound. The band name relates to the initials of the band’s new membership; C (Chris), Z (Zoe) and R (Rich) - CAEZAR