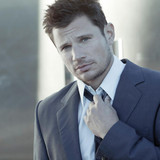 As boy bands like Backstreet Boys and *NSYNC redefined pop music for the masses at the close of the 1990s, 98° were also making a splash on the charts and MTV. Fronting the vocal group was Nick Lachey. The onetime sports medicine major was born Nicholas Scott Lachey on the border of Kentucky and Tennessee in fall 1973. He and his younger brother Drew excelled in sports and academics while attending Cincinnati's School for the Creative and Performing Arts. There, the Lachey brothers honed their vocal abilities, but it wasn't until Nick was a student at Miami University in Ohio that he found himself seriously considering a career in music. He and soon-to-be bandmate Jeff Timmons were invited to attend auditions for an up-and-coming vocal group in Los Angeles. Drew and pal Justin Jeffre jumped aboard shortly thereafter, and 98° was sired. The band went on to release four albums (all of which went platinum), and singles such as "My Everything," "Way You Want Me To," and "Give Me Just One Night (Una Noche)" became chart and radio favorites across North America. Just as the boy band phenomenon began winding down, Lachey decided to focus on other ventures. The second tenor married his longtime girlfriend, singer Jessica Simpson, in fall 2002 and launched a solo career. He and Simpson instantly became A-list celebrities when their MTV-based reality show, Newlyweds, captured American audiences in 2003. While their show was still going strong, Lachey issued his first album for Universal, the R&B/pop-flavored album SoulO, before the year's end. In between albums, Lachey tried his hand at acting. He appeared in several episodes of the WB's Charmed in 2004 and 2005, and had a small part in the Nora Ephron comedy Bewitched. Before the year's end, Lachey and Simpson announced their separation. In the midst of a tabloid field day, Lachey resumed his music career in spring 2006 with the release of his second album, a number two hit titled What's Left of Me. What's Left of Me wound up earning a gold certification from the RIAA -- its title track reached six on the Billboard Hot 100 -- but Lachey's recording career soon reached a standstill. He began work on a third album in 2007, but a series of delays led to Jive scrapping the album in January 2010. By June of that year, he wound up leaving the label. As he toiled on this project, he wound up signing a deal to host the NBC vocal competition The Sing-Off. Debuting in 2009, it stayed on the air until 2014. During the show's run, he released the family album A Father's Lullaby on Fisher-Price in 2013. Once The Sing-Off wrapped up, Lachey released a collection of cinematic covers called Soundtrack of My Life on his Little Nicky label in November 2014. After a couple of quiet years, Lachey re-emerged in September 2017 as part of the cast for the 25th season of Dancing with the Stars. In November, as the season reached its close, Lachey released the single "Someone to Dance With." ~ MacKenzie Wilson