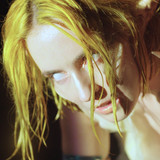 Livia Rita is a singer and designer with an inexhaustible source of creativity and devotion to music, visual art and a progressive way of thinking. Livia Rita has developed her eclectic musical style drawing on a wide range of influences and genres spanning electronic, pop, experimental, classical and new wave styles. She subverts the listeners with each song, as wild, brutal textures meet vulnerable, otherworldly melodies in adventurous and emotional ways. The debut album FUGA FUTURA is set for release in early 2021. The launch will include a series of music videos and a newspaper full of spells , featuring the lyrics of each song with photography of its correlating

ArtFashion collection. Livia Rita explores avant-garde ways of performing her synthesiser drenched music through a strong visual identity formed of ArtFashion and stylised movement designed by herself. Performing with a gang of dancers and a band, her work collides into a 4D explosion of art; a surreal live music video that straddles fantasy and reality. It’s an ambitious search for a new collective identity which reinvents itself from a state of freedom, where performance empowers the listeners to gain ownership over the future. Art becomes a space for rebirth in relation to nature, gender and new notions of beauty.