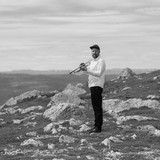 Norwegian trumpeter/multi-instrumentalist Mathias Eick is a thoughtful, ambient-leaning jazz musician. Born in 1979, Eick has performed with a variety of name players and is a member of the Trondheim Jazz Orchestra and the progressive jazz/electronic ensemble Jaga Jazzist. As a trumpeter, Eick is much in the tradition of such players as Kenny Wheeler, Chet Baker, Miles Davis, and Enrico Rava. Eick released his solo debut album, The Door, on ECM in 2008. That same year he was also featured on guitarist Jacob Young's ECM release Sideways. In 2011, Eick returned to his solo work with the more contemporary pop-oriented Skala, and with Jaga Jazzist for Live with Britten Sinfonia and Iro Haarla's quintet on Vespers with Trygve Seim, Ulf Krokfors, and Jon Christensen. Already prolific, Eick contributed to no less than seven albums the following year including Motorpsycho's The Death Defying Unicorn and Mighty Sam McClain's and Mahsa Vahdat's A Deeper Tone of Longing: Love Duets Across Civilizations. The following year Eick played his own lengthy tour of Europe and an abundance of live dates as a sideman. Still he found time to work in the studio. He and vocalist Elvira Nikolaisen issued the contemporary jazz collection of ballads I Concentrate on You for Grappa, and he also lent his horn to Alexander Von Mehren's Aéropop. His recording schedule in 2014 proved hectic: He performed on no less than seven recordings including albums by Lars Danielson, Tania Saleh, and the Eple Trio. His own Midwest was issued by ECM in 2015, performed by his quintet featuring pianist Jon Balke, violinist Gjermund Larsen, percussionist Helge Norbakken, and bassist Mats Eilertsen. Critically acclaimed, it made year-end best-of lists across the globe. Eick spent the rest of the year touring Europe. The road work continued the following year as did his session work, playing on albums by Beady Belle and Nathan Sykes among others. While the trumpeter played select dates in 2017, they took a back seat to intense session work. He appeared on no less than seven recordings. Some standouts include Kari Ikonen's Ikonostasis, Kåre Kolve's live set Interactions at Vossajazz, and Danielson's Libretto 3. In the spring of 2018, Eick issued his fourth acclaimed leader date for ECM. Entitled Ravensburg (after the home village of his grandmother), it was the first of his recordings to find him doing double duty on trumpet and vocals. He was accompanied on eight of his own compositions by violinist Hakon Aase, pianist Andreas Ulvo, electric bassist Audun Erlien, and drummers/percussionists Thorstein Lofthus and Norbakken. ~ Matt Collar, Rovi