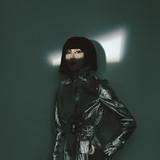 First known as the frontwoman for the Yeah Yeah Yeahs, Karen O branched out from the band's incendiary rock soon after their debut album, Fever to Tell, was released in 2003. Though she didn't release a full-length solo album until the lo-fi balladry of 2014's Crush Songs, her numerous side projects and collaborations presented different facets to her artistry. Along with loaning her malleable yet distinctive voice to peers such as Santigold and the Flaming Lips, many of her collaborations had a decidedly cinematic bent. Not only did she appear on the soundtracks to David Fincher's The Girl with the Dragon Tattoo (2011) and Tim Burton's Frankenweenie (2012), she also made a memorable appearance on David Lynch's album Crazy Clown Time (2011). One of her most enduring creative partnerships was with director Spike Jonze: Her music for 2009's Where the Wild Things Are and 2013's Her garnered Grammy and Academy Award nominations. O brought the tender, fiery, and dramatic sides of her music together on her 2019 collaboration with Danger Mouse, Lux Prima.

Born in Busan, South Korea, to a Korean mother and Polish father, Karen O spent most of her childhood in Englewood, New Jersey. While attending Ohio's Oberlin College, she met drummer Brian Chase. When O transferred to New York University's Tisch School of the Arts, she met guitarist Nick Zinner, with whom she began making folky music as Unitard in 2000; soon after, they became the Yeah Yeah Yeahs after being inspired by Ohio's legendary avant-punk scene. When the drummer they recruited initially bowed out, Chase joined the lineup. The Yeah Yeah Yeahs soon established themselves as a vital force in New York's thriving early 2000s rock scene with releases like 2001's self-titled EP and their 2003 full-length, Fever to Tell. Meanwhile, O pursued more introspective-sounding projects on her own. She loaned her vocals to "Hello Tomorrow," a 2005 collaboration with producer Squeak E. Clean that provided the soundtrack to a Nike shoe commercial directed by Spike Jonze. That year, she also worked with Har Mar Superstar on "Cut Me Up," which appeared on the House of Wax soundtrack. In 2006, she and Peaches collaborated on the song "Backass" from the Jackass Number Two soundtrack. During this time, O also began directing videos, including the clips for Liars' "We Fenced Other Gardens with the Bones of Our Own," Foetus' "Blessed Evening," and the Yeah Yeah Yeahs' "Cheated Hearts." Though she debuted the folky side project Native Korean Rock in 2008, O continued to make soundtrack work a priority. She covered "Highway 61 Revisited" for Todd Haynes' impressionistic Bob Dylan biopic I'm Not There in 2007 and wrote the soundtrack to Jonze's film adaptation of Maurice Sendak's classic children's book Where the Wild Things Are. Arriving in 2009, Where the Wild Things Are: Motion Picture Soundtrack was credited to Karen O & the Kids, a group of collaborators including composer Carter Burwell, her Yeah Yeah Yeahs bandmates Chase and Zinner, Deerhunter's Bradford Cox, Liars' Aaron Hemphill, and the Raconteurs and the Dead Weather's Dean Fertita and Jack Lawrence. In 2010, the album's single "All Is Love" was nominated for the Grammy Award for Best Song Written for a Motion Picture, Television or Other Visual Media and for the Critics' Choice Movie Award for Best Song. Karen O remained a prolific collaborator as the 2000s became the 2010s. In addition to contributing vocals to the Flaming Lips' 2009 album Embryonic, she appeared on the song "Pinky's Dream" on David Lynch's 2011 debut album, Crazy Clown Time. That year, she also worked on the rock opera Stop the Virgens, which also featured Chase and Zinner as well as the Screamers' K.K. Barrett and the Breeders' Kim Deal. Her busy 2011 continued with a version of Led Zeppelin's "Immigrant Song" that she recorded with Trent Reznor for the soundtrack to David Fincher's The Girl with the Dragon Tattoo and a brief appearance on Tim and Eric Awesome Show, Great Job! The following year, she appeared on Swans' The Seer, James Iha's Look to the Sky, and Santigold's Master of My Make-Believe, and contributed the exotica-tinged track "Strange Love" to Frankenweenie Unleashed!, the soundtrack to Tim Burton's 2012 film Frankenweenie. In 2013, O reunited with Jonze to provide music for his acclaimed film Her. "The Moon Song," which she co-wrote with Jonze, earned a nomination for the Academy Award for Best Original Song in 2014 and a Grammy Award nomination for Best Song Written for Visual Media in 2015. She then appeared on We're All Young Together, the 2014 solo debut from the Walkmen's Walter Martin. O released her own solo debut, Crush Songs, a collection of lo-fi sketches she recorded in 2006, in September 2014 on Julian Casablancas' Cult Records label. The album reached number 44 on the Billboard 200 Albums chart and number eight on the Billboard Top Alternative Albums chart. The concert album Live from Crush Palace, which was recorded at Hollywood Forever Cemetery's Masonic Lodge, appeared the following February. That year, O wrote a song paying tribute to Nellie Bly for a Google doodle celebrating the journalist's 151st birthday, and also wrote "I Shall Rise," the theme song to the Square Enix video game Rise of the Tomb Raider. Following the birth of her son, O took some time off and returned in 2017 on Milano, a collaboration with composer Daniele Luppi and Parquet Courts, and also appeared on Resistance Radio: The Man in the High Castle Album. The following year, she released "Yo! My Saint," a song written for Kenzo's Spring/Summer collection that featured vocals from Michael Kiwanuka. For her second album, 2019's critically acclaimed Lux Prima, O collaborated with Danger Mouse on a set of songs inspired by motherhood and life cycles. Album single "Woman" was later nominated for a Grammy for Best Rock Performance. ~ Heather Phares, Rovi