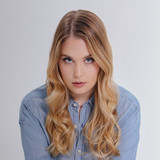 You can feel Valerie Broussard’s dynamic vocals and emotionally charged songwriting in massive smash collaborations, through hundreds of film, television, and video game placements, projected from some of the biggest stages in the world, and within her solo output. Garnering just north of half a billion total streams, her voice and pen power Kygo’s “Think About You” and “The Truth” as well as the 2019 League of Legends theme “Awaken” with Ray Chen. Her music rings out on tentpole programming across NETFLIX, The CW, ABC, Prime Video, SyFy, HBO, and more. Meanwhile, her solo output has garnered praise from Refinery29, OnesToWatch, and many others. Beyond music, she remains a staunch advocate for a myriad of causes. Diagnosed with dyslexia as a kid, she fought hard to learn how to read, eventually devouring The Lord of The Rings and Harry Potter series and expanding her sci-fi and fantasy fascination any chance possible. Now, she pushes for literacy and even launched a de facto online book club, purchasing How To Be Anti-Racist by Ibram X Kendi for various followers to read together with her. On her debut EP Voyager [AWAL], she presents her own brand of cinematic space pop uplifted by otherworldly vocals, vivid lyrics, and expansive vision.