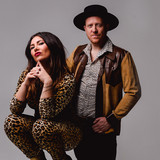 Killing Heidi are officially forever. Twenty years ago, when the disarming folk-pop of Kettle launched Ella and Jesse Hooper into high radio rotation, it was something neither expected. But tour after tour, the Violet Town siblings are finding their explosive power pop more entrenched in the Oz rock pantheon.