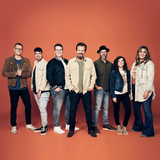 One of the most enduring and highly decorated bands in the CCM community, Casting Crowns is a Grammy- and Dove Award-winning collective founded and led by youth pastor Mark Hall. Characterized by searing guitar work, uplifting melodies, and super-sized production, the band has won over secular audiences as well as believers via career-making LPs like The Altar and the Door (2007), Come to the Well (2011), and The Very Next Thing (2016). Since emerging in the late '90s, Casting Crowns have sold over ten million albums and dominated Christian radio via chart-topping singles like "Lifesong," "Until the Whole World Hears," and "Courageous." Casting Crowns formed in 1999 as a student worship band in Daytona Beach, Florida. Led by singer, songwriter, and youth pastor Mark Hall, the group's initial lineup also included violinist Melodee DeVevo and a pair of guitarists, Juan DeVevo and Hector Cervantes. The musicians relocated to McDonough, Georgia in 2001 and expanded their lineup by adding bassist Chris Huffman, keyboardist Megan Garrett, and drummer Andy Williams. This augmented version of Casting Crowns released two independent albums, both of which were well-received in the Atlanta area. One of the albums then found its way into the hands of Mark Miller, lead singer for the country group Sawyer Brown, who was struck by Casting Crowns' driving pop/rock style plus Hall's vocal delivery of his hard-hitting but devout songs. Miller signed Casting Crowns to his fledgling Beach Street Records, a division of Reunion Records with distribution by the Provident Label Group, and took the group into the studio along with co-producer Steven Curtis Chapman, himself a popular artist on the CCM musical scene. The resulting album, Casting Crowns, was released in 2003 on the Beach Street imprint. It fared extremely well in Christian markets, eventually going platinum and peaking at number two on the CCM charts. A sampler with five songs, Live from Atlanta, was released on Reunion Records in 2004, packaged with a bonus DVD containing band interviews and a music video. Lifesong, released in August 2005, became the band's most successful record yet, cracking the Top Ten in the secular market while maintaining the band's religious fan base as well. Like its predecessor, the record went platinum, and Casting Crowns' increased popularity helped send their follow-up album, 2007's The Altar and the Door, to number two on the Billboard album chart. Meanwhile, the single "East to West" spent a record-breaking 16 consecutive weeks atop the Christian chart. The Christmas album Peace on Earth appeared in 2008, tiding over the group's fans (and yielding a number one hit, "I Heard the Bells on Christmas Day") while Casting Crowns readied another LP of original material, Until the Whole World Hears, which arrived late in 2009. Inspired by the story of Jesus and the Samaritan woman at the well, Come to the Well, the band's fifth studio album, was released in October 2011. The following year, guitarist Josh Mix replaced Cervantes, and in early 2013 the band issued The Acoustic Sessions, Vol. 1. The Top Ten album Thrive came a year later. In 2015, they released a compilation of singles, hymn covers, and alternate acoustic versions called Glorious Day: Hymns of Faith, as well as A Live Worship Experience, which was recorded that summer at Eagle's Landing Baptist Church, where Hall worked as a youth pastor. September 2016 saw the release of The Very Next Thing, Casting Crowns' studio follow-up to the chart-topping Thrive. For their next release, they offered the holiday-themed EP It's Finally Christmas in late 2017. In November 2018, the veteran band returned with Only Jesus, their tenth studio album. ~ Steve Leggett, Rovi