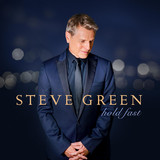 As Steve celebrates 34 years in the Christian music industry, he fondly remembers his fledgling beginning in 1984 when Steve Green Ministries was established. After two years in college, two years with the group TRUTH, and five years with the Gaithers, the door opened for Steve to make his first recording with Sparrow Records. Following a significant spiritual awakening, Steve and Marijean began responding to invitations from churches all over America. “Looking back on it,” Steve recalls, “I’m amazed at God’s patience and condescending love. In my case it is certainly true that God delights in choosing the least likely. In my early years I was full of zeal and determined to get it all right, but blind to much self-righteousness and pharisaical pride. Thank God for His continuing mercy!” Steve prays for the kind of spiritual growth that J. C. Ryle describes. “When I speak of a man growing in grace, I mean simply this – that his sense of sin is becoming deeper, his faith stronger, his hope brighter, his love more extensive, his spiritual mindedness more marked.” Throughout his years of ministry, Steve’s music has been honored with 4 Grammy nominations, 18 No. 1 songs, and 7 Dove Awards, Christian music’s highest honor. With 40 recordings to his credit, including children’s projects and Spanish-language albums, Green has sold over 3 million albums worldwide.