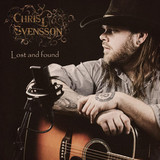 After spending 4 years with the Swedish rock band Dirty Passion Chris wanted to get back to his roots. The band took a break but Chris didn´t and instantly started working on his solo debut Album Story Of My Life. The album was well received and Chris went to the U.S for a promotion tour. In 2017 Chris entered the Swedish competition P4 Nästa and won the local competition and got selected for the national finals with the song Drive. 2019 the album North Meadow Drive was released, an album with a lot of songs with inspiration from a roadtrip thru the U.S Later in 2019 another trip to the U.S and Nashville resulted in the recording of two songs, Battle Scars and I Want To, produced by Nathan Meckel. In late 2019 an acoustic album was recorded. Lost and Found was born and released August 7th 2020. Chris grew up in a small town in the south of Sweden and music runs in the family. At a early age he started writing songs, mostly inspired by legends such as Johnny Cash, Waylon Jennings and Willie Nelson. Chris entered a couple of talent shows with his Country music and a career had begun.