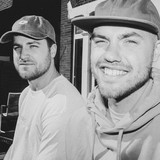 Summers Sons are a jazz rap group from South London. Consisting of Turt (vocals) and Slim. (production). They are actual brothers, Summers is their surname. November 2019 they released their second full-length project The Rain, the most advanced piece of work the duo has come forward with so far. "Slim" is breaking away from traditional song structures while keeping his trademark sound intact. The beats on The Rain are sparse and ever changing at the same time. "Slim" creates strong atmospheres and melodies which provides the perfect backdrop for Turt's introspective and sometimes painfully personal lyrics. One of the album's main topics is the unexpected death of Turt's and Slim's stepfather in November 2017. In 2020, Turt teamed up with long-time friend, pianist and singer C.Tappin and Cologne beat guru Twit One. Under the name Syrup, they released their joint project Rosy Lee in late summer. Their style of music is called Cool Bap.

Since signing with Melting Pot Music in 2017, Summers Sons have released a mini-album "Undertones" and their debut album "Uhuru together with C.Tappin. They have been featured on albums by Twit One and Flatpocket, toured with Children of Zeus and played shows with Melodiesinfonie and FloFilz. The latter also remixed one of their songs as did Twit One and Cap Kendricks. At the end of 2020, Summers Sons haven been part of The Silhouettes Project, a platform for up-and-coming Hip Hop, Soul and Jazz artists in the UK.