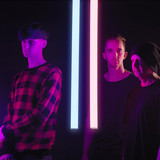 Originating from Guildford and South London, 2far2jump - vocalist/guitarist Luke Harland-Cole, lead guitarist Rupert Barker and Drummer Aaron Mann - are a group of ordinary guys dreaming the extraordinary life of the rock 'n' roll musician. Growing up in an the UK's vibrant and immersive music scene, each one of these lads have fantasised on the prospect of one day making it from a general standing ticketholder to stage-side performer looking back out into the crowd. Developing their own musical experiences up to this point, these three music-lovers collectively have a diverse pool of influence to draw upon in their own unique and creative style. Citing influences for their music such as Linkin Park, As It Is, You Me At Six, The Hunna and more, the music created from 2far2jump with its guitar driven melodies, thought proving lyrics and hard hitting drums is determined not to disappoint the everyday rock and alternative fan. Reaching increasingly new heights, the band have seen success of their recent single 'Monsters' by achieving a two week national tv play of their music video on Kerrang! TV. A back catalogue of 2 self-released EPs and a handful of singles, these lads have firmly found their feet as an artist and are for you to share on their journey. All social media: @2far2jump Contact: info@2far2jump.com