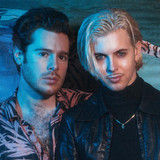 Their third offering ‘Killing Me’ featuring Whinnie Williams, critics are again united in hailing Crystal Bats – Will Jones and Will Vaughan – as one of the most compelling and innovative acts on the current London landscape. With a deft, artful touch for codeine-laced, soulful sounds, ‘Killing Me’ triggers the kinds of joyful disco vibes of the hedonistic 80s but also a sheer natural style and charisma that takes them into truly singular territory. Crystal Bats aren’t in the habit of dropping incessant releases, but the care, craft and aesthetic they deliver are shared by only very few artists coming out of the city right now. A triumphant return for the glamour boys and with this new co-sign from Whinnie Williams (a co-writer with Madonna), should take them, rightfully, onto many further critics’ radars for 2017.