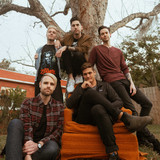 For as much as the world has changed since Real Friends first emerged in 2010, the band’s mission hasn’t. The Illinois quintet continue to bleed without apology and write songs that make it okay to feel everything: the ups, the downs, and anything else in between. Rather than shy away from emotion, the group run right towards it with distortion cranked and hearts opened, tightening their careful distillation of pop and punk on each subsequent release.

When the band—Dave Knox [lead guitar], Kyle Fasel [bass], Eric Haines [rhythm guitar], and Brian Blake [drums]—welcomed vocalist Cody Muraro in 2020, the goal stayed the same as they crafted new music for Pure Noise Records. Over the years, Real Friends have forged and strengthened a deep connection with fans. The group’s 2014 full-length debut, Maybe This Place Is the Same and We’re Just Changing, marked a turning point. Rock Sound named it one of the “Top 50 Albums of the Year.” 2016’s The Home Inside My Head maintained this momentum with further acclaim and sold out shows. In 2018, Composure incited applause from Music Connection, Alternative Press, Substream Magazine, New Noise, and Billboard who described it as “raw.” To date, they’ve also amassed over 100 million streams and counting. In 2021, they turned the page on a new chapter with the singles “Nervous Wreck” and “Storyteller.”