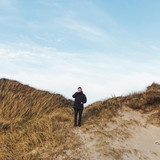 Tracked in a church in Glasgow’s West End, Luke’s sophomore release, 'Glass Island' is a beautifully-realised record which builds on the minimal piano and violin of last years debut, 'Voz' by adding ambient synths, glitches and beats. Co-written and performed with violinist Amira Bedrush-Mcdonald, it explores the tensions of living on an island in the wake of referendums on leaving the EU and Scottish independence. The songs, explains Luke, have “confidence and strength, but also a fragility and drama”. 'Glass Island' was released in April 2019 through Canadian label, Moderna Records.