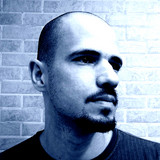 Midipixel is the creative studio and artistic moniker of Werther Azevedo, a composer of video game and synth-based music, based in Rio de Janeiro, Brazil. After playing keyboards in local heavy metal bands for many years, Werther decided to follow a longtime passion of making music and sound for videogames. He started to act as a professional composer in this field back in 2007 and haven't stopped since. After a 5 years tenure as half of psy-trance act Escape Into, Werther has also incorporated the electronic and synth aesthetic into his rock/metal/games background. Midipixel, a name that once symbolized the essential elements for electronic music (midi) and digital design (pixel), is thus embraced as a musical identity that encompasses digital music making in a broader sense.