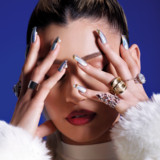 Alina Eremia debuted in the music industry at the age of 5. In 2005, she represented Romania in the Junior Eurovision Song Contest 2005 with the song “Țurai”. Starting with 2008, Alina collaborated with Disney Romania, dubbing the singing voice of Pocahontas or Belle in Beauty and the Beast. In February 2011, she plays Ioana in the teenage sitcom series Pariu cu viața, one of the main characters. Following, she also entered Lala Band, with which she achieved hard-to-reach performances: 5 albums, the best-selling album of 2012, four national tours, over 150 hours of live music, over 150,000 fans at the concerts to see their idols.   Alina started her solo career with the single "Esti vara mea", which was broadcasted on the Romanian radios in that summer. She followed her solo career with "In dreapta ta", featuring Vescan and "Cum se face", singles that enjoyed a huge success and have brought her notoriety to the local music industry. After that, she released singles such as “A fost o nebunie” and “Poarta-ma”, highly appreciated by the fans, or her latest songs “Out Of My Mind” (featuring Novaspace), “Imi dai curaj” (featuring Grasu XXL), “Doar noi” (with Mark Stam). In 2017, Alina Eremia released her first solo album, entitled “360”, that gathers some of her powerful hit-singles and new songs.