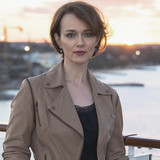 Laura Cantrell is a Nashville-born, New York-based country music artist. Since her critically acclaimed debut in 2000, Not The Tremblin’ Kind, Cantrell’s music has been celebrated in The New York Times, O Magazine, Elle, and the Wall Street Journal, and has been featured on NPR’s “All Things Considered” and “Weekend Edition,” as well as Bob Dylan's "Theme Time Radio Hour." She has performed on “Mountain Stage,” the “Grand Ole Opry,” and “A Prairie Home Companion,” and appeared on the BBC's "Andrew Marr Show," “Late Night with Conan O’Brien,” and Sundance Channel’s “Spectacle: Elvis Costello.”. Her most recent release, Laura Cantrell at the BBC, compiles the best of her UK radio performances from 2000 to 2005, tracing her rise as an Americana artist on the airwaves of the British Broadcasting Corporation, where she was a frequent guest of pioneering DJs John Peel and Bob Harris. Laura is also the host of "Dark Horse Radio," a weekly show about George Harrison on SiriusXM's The Beatles Channel, and the bi-weekly "States of Country" program on GimmeCountry.com.