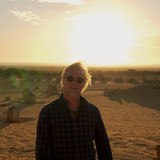 Mark Eden has been writing/playing music over many genres for over two decades now. His upliftig music has been played on radio stations like Triple J, RRR etc and his music videos were aired on TV ( MTV, Rage,…). Touring Australia and Europe with his band or solo made him develop his own acoustic, rootsy, folk souly rockpop sound which people love to dance and sing along to. After releasing a couple of studio albums with his alternative rock band Under The Tongue in the last few years, he finally comes back to his roots and his 4th solo album 'Things To Be' is out now...check it out here: https://ffm.to/markedenthingstobe https://open.spotify.com/album/3b8mmlVLona0WJZdaDMIIB?si=Cs2M79dfQIGTdnPXCupE2w