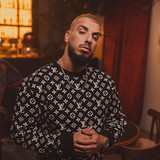 Born in Bochum, Germany, Ariya Rahimianpour known as AriBeatz was surrounded by music of all different kinds of cultural influences from a young age. Influenced by American hip hop and Latin-American music, he begins writing his own works and becomes popular among rap artists in the region. His first productions land him the attention he deserves. Besides the German rap scene, he starts working and delving into the French hip-hop scene and delivers multiple hit productions for artists such as Kaaris, Booba, Sofiane, Djadja or his long-term cooperation friend Soolking. The successes in France and multiple top-10 hit records in Germany, Austria and Switzerland with artists such as RAF Camora, Nimo, Azad or Miami Yacine make AriBeatz become a well-established name in the scene. 2018 marked the year for him to start releasing his own material as an artist that found a summary on his first long play record "Press Play" in 2019.