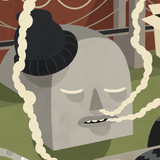 Smoke Trees is a producer out of Stuttgart, Germany. He’s acclaimed for his smooth and relaxed beats. He’s an expert on the laidback vibe. Be it jazzy, funky, trippy, classic or even with a more abstract style.   In February 2017 he released »Into The Deep« via Urban Waves Records (Vinyl, Cassettes) // listen: Into The Deep In November 2017 he was part of a Split-LP with Juan Rios – released via Melting Pot Music (Vinyl, Cassettes) // listen: KO-OP 1 2018: Irratio via Sichtexot, Steamer via Urban Waves (Vinyl) 2019: Inhale + Exhale via Estugarda (Vinyl)2020: Across The Horizon for Ian Urbina’s Outlaw Ocean project2021: Start of the single-series "fragments"