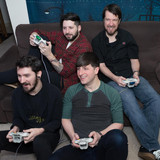 What started as one person working on music to cope with anxiety, eventually blossomed into a musical reunion of close friends. Boston-based indie rock four piece, Cat geography, is no stranger to the local scene. Their experience over the past decade throughout various projects in the Boston music scene, has culminated into an expressive step forward. Their debut album “Keepsake” was released in April of 2019. Since then, the band has put out a few thoughtful acoustic releases while crafting and honing in on their sound.  On August 14th, they finally revealed the outcome of their efforts. Cat Geography’s new EP, “I Know, I Know” is a powerfully executed kaleidoscope of indie rock, emo, and punk sounds. From the light hearted jabs of “Rituals”, to the darker isolated feelings of artistic anxiety in “Tar Pit”, there’s a lot of range on display throughout the short journey.