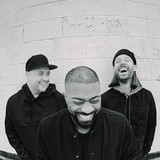 Since forming a decade ago in their native Toronto, Keys N Krates have carved their own path via a bass-centric, sample-driven sound, melding the realms of electronic, hip- hop and beyond. Their early sound succeeded in combining catchy, pitched up, chopped vocal samples with 808s, resulting in off-kilter festival smashers like “Dum Dee Dum”, “Treat Me Right”, and other fan-favorites. These songs would be reinterpreted into energetic live versions that the trio would play to create their own experience and vibe and at the same time cementing Keys N Krates as a fixture in festival bass and trap music. Keys N Krates found ways to blend their developing 808-based sound with their live band performance. They’ve taken their distinctive show to countless festivals including Coachella, Lollapolooza, and Sonar, and on three North American headlining tours. Keys N Krates’ 2018 debut album Cura represented a musical shift for the band as they embraced their love for R&B/soul music, more dense instrumentation (such as strings and woodwind instruments), and catchy vocal-driven pop songs. Anthemic songs with Tory Lanez, Ambre Perkins, and 070 Shake weaved together the band’s technicolor world of vocal-driven songs supported by sample-chopped beats that blended the sounds of disco, trap, and boom bap rap of the 90s. This synthesis earned them commercial radio success along with live sold out shows across the world and plays across the biggest festival stages.