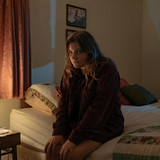 They say it's grim up North and one listen of breakthrough singer-songwriter Brooke Bentham's opening salvo in 2017 might reinforce that sentiment. “It's funny how small things can wreck away at your life, when you're not doing anything but living inside,” she sings on the opening track of her debut EP The Room Swayed. The swells and plummets of the track - Nowhere Near Sense – possess the epic alt rock journeying of War On Drugs with the emotional vocal depths of Sharon Van Etten or Angel Olsen. That all this is the fruits of a 21-year-old from South Shields outside of Newcastle might take you by surprise. It carries the weight of someone who's lived a hundred lives already.   She picked up a guitar early, even attempting the banjo, and started taking singing lessons at the age of 15. Eventually her first taste of success – a song called Oliver – was a turn in the road. That tune brought her the sonic direction she was working towards - showcased perfectly on The Room Swayed and it's first single Heavy and Ephemeral. Follow-up EP This Rapture delved further, showcasing a remarkably assured yet breathtakingly vulnerable set of tracks. Debut album Everyday Nothing, produced by Bill Ryder-Jones, soundtracks the reality for many young people today. Where hopes and dreams play out in a haze of confusion and frustration. Capturing an existential vulnerability, the baffling day to day-ness of a young life in the most relatable, poetic and compelling of works.