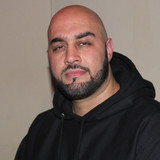 With over 10 years of skin in the game, Arash Motian is known as “Motian” is a well seasoned Hip Hop artist making his world debut. Using his Persian origins to stimulate poetic lyrics and strong delivery, Motian focuses on telling a story in every song and elevating the right emotions. Motian was born in Tehran, Iran, and was brought to the United States at the age of 12, where he was introduced to Hip Hop for the very first time. Having to learn English quickly was challenging but listening to Rap strengthened and accelerated the learning process. Although the lack of proper English dialog led to being bullied and outcasted, Motian learned how to stand out when struggling to fit in. These events eventually turned into songs like “Walking Tall” where Motian talks bout Bullying & Suicide Awareness. Teaming up with H.F. Stevens Middle School in Crowley, Texas to shoot a powerful visual that shines a light on the matter which featured real students who were affected by Bullying. Since then, Motian has continued to deliver powerful music and visuals while expanding his musical ecosystem. In 2021, Motian started his Record Label & Production Company called “MMPG” where he focuses on providing opportunities to producers from around the world and helping to shop their beats into the U.S. music scene. Learn more on motianmusic.com