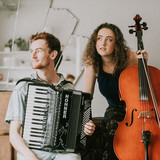 Good Habits are a UK alt-folk duo, telling stories and turning heads across the globe.  Composed of singer-cellist Bonnie Schwarz and accordionist Pete Shaw, Good Habits create folk-infused songs that test the limits of their traditional instruments.  With ambition and versatility at the centre of their philosophy, Good Habits launched their duo project in October 2019. The standing-singing-dancing band embarked on a 40 show tour across New Zealand, wowing audiences across the length and breadth of the country in the process. Covid-19 left them stranded in New Zealand, but thanks to the warmth and support of new friends, they have made the most of NZ’s triumphant recovery. Recent winners, of the Purbeck Folk Rising competition, the duo re-embark across New Zealand on their Spring-summer Album Release tour, and are set to play at Resolution, Canterbury Folk Festival, Sanctuary Sounds Festival amongst a full schedule. ‘An impressive, interactive show’ - The Mancunion “The tightness and precision of their playing together made every song a gem” - Fresh Fm  They thank PRS Music for supporting their new album project 'Going For Broke'