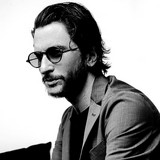 Songwriter, composer and producer Gary Go has been creating music since he got a Casiotone keyboard when he was eight.   After producing his debut So So EP, Go started playing shows around his home city, including support slots for The National and Madrugada until headlining his first sell-out show at London’s legendary Barfly. After self-releasing two EP’s (So So and The Diary of Rodney Harvey) on his Canvas Room label and playing shows across the UK, Go moved to Hoboken, New Jersey to write and record his debut album. A demo of his song Brooklyn caught the ear of Decca Records in London. Decca brought back their DERAM imprint and released ‘Of Youth/Of Beauty’, the sub-title for Go’s eponymous debut.   Following the release of Gary Go, and tours with artists including Lady Gaga, Snow Patrol, The Script and MIKA, Go created the soundtrack and short film Now Was Once the Future. The soundtrack’s opening song Cinema was reimagined by electro producer Benny Benassi resulting in a worldwide club hit, further propelled by a Grammy-winning Skrillex remix.   After touring internationally with Benassi to promote his Electroman project on which they had collaborated, Go’s penmanship was enlisted by a host of other artists including Rihanna, Robbie Williams, Steve Angello and The Knocks.   Go then turned to the big screen, composing the music for two feature films, including the score for the cyber horror flick Friend Request, before striking at the elements for his next solo endeavour.