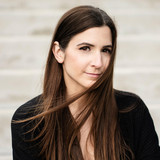 If there’s one thing that makes Los Angeles Americana pop artist Natalie Duque happy, it’s a sad song. The singer-songwriter infuses soulful folk melodies into a pop delivery garnered with poetic lyricism. Through evocative and comforting vocals, she communicates feelings of truth, connectedness and vulnerability. The artist has worked with Grammy Award-nominated songwriters like Cam whose co-write on Natalie’s single "When I Fall," has been placed in film and lent her voice to soundtracks for movies such as Black Christmas, The First Purge, and Happy Death Day. The artist’s third and latest EP, Brave is Beautiful, was released in 2018 and was produced by Wayne G. Miller (Christina Perri) It showcases her strongest and boldest foray into the pop singer-songwriter space. Natalie Duque’s sound charts a course through pop sensibility, country-influenced lyrics, and Americana-inspired instrumentation, and the destination is an experiential musicality filled with expressions of pain lifted by soothing hope. Drawing inspiration from Miranda Lambert’s playful lyricism and Adele’s no-holds-barred honesty, Natalie culls moments from her own life and sets them to melodies that meander gracefully over plucked guitar strings and soul-baring lyrics.