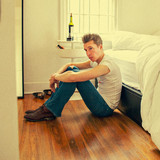 “I might not make it home, but I’ll make it through the night,” sings Chris Milam on the penultimate track of his new album, Meanwhile (out April 24). It’s a fitting—if ominous—coda for an album that explores the ways we survive periods of transition. For the Memphis singer-songwriter, and for most of us, the last few years have been a time of seismic transition. Supporting the 2017 release of his critically-acclaimed breakout Kids These Days (“Invites—and earns—the Paul Simon comparisons,” raved American Songwriter), Milam toured across North America and the UK, played festivals and theaters, and collaborated with heroes (e.g. Stax legend William Bell). Musically, things had never been better. But personally, Milam marked these years by his dad’s losing battle with multiple myeloma (i.e. blood cancer). As such, Meanwhile takes death head-on: the personal-as-political anguish of “In the Blood”; the suicidal ideation of “Lonely Living Right”; the playground elegy of “Dogwood Spring.” “It’s tough, but it’s tough for everyone,” insists Milam. “There’s a weight in the air. When the world is full of existential dread, how do you just get through the day?” Meanwhile offers ten perspectives on that question, from an unsparing portrait of substance abuse (“Whiskey In The Morning”) to cheeky self-satire (“Girl In Every Town”). This album crucially focuses on the exterior by way of the interior. The result is a warm, deeply intimate, open-hearted portrait of a broken psyche.