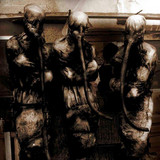 Its origins date back a long time ago, when five undiagnosed mental patients are admitted to a high-security psychiatric facility... After years of quarantine, isolated from any human contact, they are selected to participate on an experiment that ultimately lead to a pathological phenomenon called INSANIAM. Neurotic Mental Storm is the first studio album produced by INSANIAM. It was released on 11 september 2015. Engineered by Juanan López at Shade Studios (Albacete, Spain). During 2015, 2016 and 2017 the quintet has been offering shows with a terrifying staging at different points of Spanish geography, sharing stage with prestigious national bands such as Tierra Santa, Angelus Apatrida, Saurom, Morphium, Frozen Dawn, Balmog, Reincarnation, Onomasy, Stained Blood and many others. In November 2016 they reached the first place in metal category of the mythical contest 'Villa de Bilbao' (Bilborock), in which they obtained diverse prizes to the best band, best singer, best bass player and best guitarist. In August 2017, these five demential people were isolated to conjure their second self-produced studio album, Ominous Era, which was released on 24 January 2018. Engineered by Pepe Cifuentes and Javi Milla at Perdido Studios (Albacete, Spain). With this new album, INSANIAM strengthens its style and image and they continue their tour throughout Spain without anyone who can stop the infection.