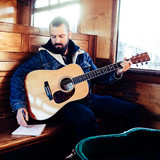 Peetman (1977) was born and raised in the Dutch countryside. At the age of 16 he started playing in bands. Inspired by the likes of Leon Redbone and Johnny Cash and annoyed by the eternal quarrelling among band mates, he opted for a solo career in 2014. The lack of fellow musicians on stage was compensated by learning an old guitar technique called fingerpicking which allows a guitarist to play basslines and melody simultaneously. Throw in some humorous lyrics, and the typical Peetman sound was born.