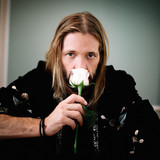 Known principally for his role as drummer for the post-grunge rock act Foo Fighters, Taylor Hawkins was born in Dallas on February 17, 1972 but grew up in the surf and sand of California's Laguna Beach. Influenced from his youth by the Police's Stewart Copeland, Hawkins briefly spent time early in his career honing his skills with the experimental group Sylvia before enlisting in the touring band for Canadian singer/songwriter Alanis Morissette. When the Foo Fighters suddenly found themselves without a drummer in 1997, Hawkins jumped at the chance to join the group's ranks behind the drum kit. Though immensely enjoying his position with the band -- and just as the Foo Fighters grew to be considerable stars in the alternative rock world of the late '90s and into the 2000s -- Hawkins considered himself somewhat of a frustrated songwriter. So in the style of bandmate Dave Grohl (Nirvana drummer-turned-Foo Fighters frontman and guitarist), Hawkins began, somewhat accidentally, a side project in the summer of 2004 that would eventually become Taylor Hawkins & the Coattail Riders. Differing from Grohl, however, is that while Hawkins served as his band's vocalist, he remained the drummer as well. The Coattail Riders formed when a restless Hawkins started randomly writing songs with drummer friend (and aspiring producer) Drew Hester during a break in the Foo's schedule. Hester's housemate, Gannin, added in some guitar parts, and what started out as just the guys having a good time suddenly materialized into an album. Chris Chaney (Jane's Addiction, Alanis Morissette) was recruited for bass duties, adding his parts in only one day. Recorded in three weeks, the songs were set aside to concentrate on In Your Honor, the Foo Fighters' pending release, but Hawkins returned to them in mid-2005. The resulting self-titled album was tinged with classic rock influences including the Police, early prog rock, Devo, and Queen, and released an eponymous album in March 2006 on Thrive. Red Light Fever, the second album from Hawkins & the Coattail Riders, followed in 2010. Hawkins launched a second band, the metallic combo the Birds of Satan, in 2014, who released an self-titled album that year. He returned to the Coattail Riders in 2019, releasing Get the Money that November. ~ Corey Apar, Rovi