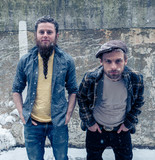 One listen to Happy Hour On The Floor, the band’s third full-length release, and it’s clear just how liberated Parsonsfield has become. Produced by Benjamin Lazar Davis (Joan As Police Woman, Okkervil River), the record fuses the group’s rustic instrumentation and timeless sense of songcraft with dreamy synthesizers and vintage drum machines. The arrangements here are broad and spacious, often built off spare, hypnotizing loops that fuel the songs’ mesmerizing drive, and the band’s performances are deliberate and economical to match, substituting lean, careful construction in place of the strummed exuberance that defined much of their early work. The result is a record all about finding happiness in simplicity, a captivating collection more reminiscent of modern indie pop than old-school string bands that pushes the group far beyond the perceived boundaries of its sound even as it shines a spotlight on the heart and soul of what’s always made them such a joyous revelation.