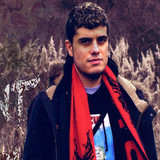 Kage Solitaire, the complicated and honest music project by a 20 something aspiring artist infatuated with music, from Chafford Hundred, Essex. With several years experience of performing, already under his belt, Kage has already performed in prestigious venues such as o2 academy Islington.

He was named as one of BBC Introducing Essex 'Sounds of 2019' for being the most played rap artist on the station that year. His music could be described as an unique and experimental blend of pop, hip hop and alternative music. Kage's heavy musical influences spire from the pioneering cloud rap stylings of artists such as Yung Lean and Bladee to the catchy pop hooks and alternative sounds of bands like Weezer and Twenty One Pilots. After a very successful debut, Kage is working on a variety of projects to take his music even further.