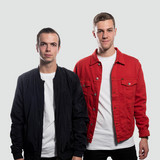 Dutch childhood friends Tim and Roberto came together in 2015 to form the energetic duo Voster & Gallardo. These guys stand for positivity and have been able to transform this into their uplifting and energetic tunes with organic instruments in its core. They started djing by the age of fourteen and made their first big appearance three years later by performing for more than 5000 people at Bevrijdingsfestival the Hague. The duo made ground by having bookings and residencies at major venues like: Patronaat, Escape and Paard van Troije. This gave their musical career a boost and created the desire of getting into music production. Honoring the desire to produce music led to the release of an unofficial remix of the hit: “Someone You Loved” which was picked up and supported by artists like Cuebrick and Mark Bale. Rapidly after this edit Tim and Roberto released multiple tracks on known labels (such as Turn It Up Muzik and Eonity). This led to international support from artists like Dash Berlin, Yves V, Rave Republic, Maurice West and many more. Their unexpected collaboration together with Giin was well received and shows what this duo is capable off. Gathering thousands of streams on their latest releases and having multiple tracks lined up for 2021 shows that Voster & Gallardo is more than ready. Paradise is out now! Follow them and be the first to find out about new tracks!