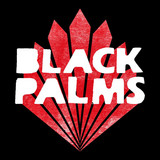 Black Palms are an emerging three-piece rock band. They count Black Sabbath, Ella Fitzgerald and Royal Blood as influences and have taken London by storm with their unique brand of soulful epic rock. Singer Bri Macanas grew up singing soul but felt the need to amplify, drifting towards a heavier sound and a rock vocal tone. Meanwhile avid metal-head guitarist Chris Sarantis, had joined Southampton pop rock band Volume and was moving in the other direction; away from the riffs and screaming and towards hooky songwriting. Bri and Chris had been songwriting and performing together before they discovered drummer and multi-instrumentalist Gaet Allard in his solo project Solar Parachute. By the time the three crossed paths in London they instantly connected: Briony brought the hooks, Gaet brought the big beats and Chris tempered the mix with his iconic octave guitar sound, their blend of metal, rock, soul and pop creating the unique Black Palms sound. The trio spent their first year captivating audiences with their live shows and have now released a debut EP 'Turned to Ash'. Physical CDs of the EP can be bought from their store. Each song is accompanied by an associated artwork, designed by award-winning artist Paul Jeffrey, with the five pieces presented on a fold-out matt digipak sleeve. Visit: https://www.blackpalms.co.uk/shop/