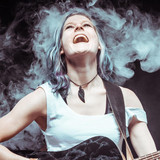 Singing, screaming, and jamming out distorted riffs on her acoustic guitar, PINSKI frontwoman Insa Reichwein is a hard rock songsmith who wears her heart on her sleeve. She ignites the stage with refreshingly rebellious energy and manages to make each show a fun, entertaining experience. In 2018 the recording of her debut album 'Sound The Alarm' with seasoned rock producer Fabio Trentini (Guano Apes, Donots, H-Blockx, The Intersphere) was completed. The newcomer was celebrated by the media, because a female act in the prog rock scene was pretty new and unusual. PINSKI toured through Germany, supported international Acts such as 'Wille and the bandits' (UK), Lazuli (FR) or Schandmaul (GER). And of course they made sure to rock all the festivals who dared to book them... In 2020 Insa started to self-produce her next EP 'we all stole from the appletree' with pop producer Martin Schmidt in his homestudio in Bonn. A symbiotic relationship between progressive rock and fresh pop sounds began, creating four tracks recommended to anyone who enjoys something new! Line-up: Insa Reichwein – songwriting, vocals, acoustic /electric guitar Ian Alexander Griffiths - electric guitar Stephan Schöpe – drums Chris Streidt/Korbinian Stocker – bass