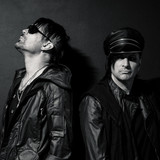 Amir Derakh, Ryan Shuck and Anthony “Fu” Valcic have been musical collaborators for 15+ years. During their time together they have weaved in and out of mainstream music like a constantly evolving musical fashion house. In the late 90's they were responsible for massive radio and sales hits such as "Blind" (Korn), "Blue Monday"," Stitches", and "Fiction" (Orgy), and recently "Crawl Back In" and "Let Down" (Dead By Sunrise with their close friend Chester Bennington). After enjoying years of traditional music business success, they have spent the last decade methodically moving away from the mainstream approach that put them on the map, opting to carefully steer their fans in a new direction, towards their new independent alternative electro rock project Julien-K – which sounds more at home with acts like Depeche Mode, Nine Inch Nails, New Order, The Presets & Interpol.