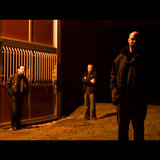 The story takes place in one of these suburbs of big cities, wavering between buildings blocks and fields, housing stocks in series and woods. Getting close to the whole trip-hop trend, in order to find a mark in the musical jumble of the late 90's, the three musicians let themselves influence by the early albums of Masssive Attack and Portishead, depressive french rock of Diabologum, non-conformist electronic music of Warp record label and the American independent hip-hop scene discovered by Anticon label. After an almost exclusivly instrumental period until 2002, confirming its taste for a mix of abstract hip-hop breakbeats, cinematic samples and electronic attemps, the band reveals himself a voice, or rather voices. In a style between spoken words and rap, recalling french artist Arnaud Miniak, Melampyre give away on his last productions a crude, sharp and somtimes naive feeling of the world around them. In a total self-production since its début, the trio choose Internet as a worldwide megaphone, releasing all their tracks for free on the website www.melampyre.com. Not really worried about regularity, Melampyre is going on its own path, taking risks in others musical styles and formats, pushed by its love of an experimentation that never forgets emotion.